The Next Turning of the Cooking Wheel: How a Pandemic Sparked More Cooking and Baking (And Not Just More Watching of the Food Network)

I love cooking. This is no surprise to those who know me.

I think many people who love cooking tell stories of growing up in their mother's kitchen, watching her cut and chop and mix and season; taking in the sounds, the smells; embraced in the oven-induced warm comfort of all day baking projects. And then eventually being instructed, little by little, how to do it all themselves.

My first remembrance of cooking went a little differently.

I was nine or ten years old. Both of my parents worked, and like many kids in the 70s, the thought of cooking never really crossed my mind. One day, my mother was going to be late getting home from work, so she called me to tell me to get some meatloaf mixed and in the oven. She told me all of the ingredients to mix together in a bowl (I had no idea what Worcestershire sauce was), what pan to put it in, and what temperature to set the oven to.

It all went pretty smoothly until I realized that I couldn't mix it very well with a mixing spoon, so I called her back for guidance. "Just mix it with your hands," she said.

I tried. I really did. But the moment my hand touched that cool, slippery, sloppy mess, I pulled it away, repulsed. There was no way I was going to do that.

But I also wasn't going to drop the ball on doing what I was told, so I went in to the hall closet and found a box of gloves that my mom used to dye her hair (or give herself permanents, I don't remember now). I slipped the gloves on, and presto! Now I could mix away without getting that gross concoction all over my hands.

I didn't know there was powder inside the gloves until I took them off. That created an unexpected mess, which may or may not have ended up somewhere in the meatloaf.


This could have been the start of my cooking adventure, but it wasn't. In fact, I didn't think much about cooking again until more than ten years later, when I was a junior in college.

My friend Brad had this idea that we should drive from Iowa down to Florida to visit his mom in Tampa for spring break. The trip itself was full of memorable tales, but most importantly, this was the true origin of my personal cooking story.

One day, before Brad and I headed out to do whatever was planned for the afternoon, Brad's mom's boyfriend, who was a chef of some type, asked us if linguine and clams sounded good for dinner. I had ever had that dish before, but it sounded intriguing and sophisticated (to a boy from the Midwest who had probably never eaten a clam before), so I was totally on board with the idea. When we returned that evening, he had everything set out and ready to go.

My curiosity had been building for hours, so I asked him if I could watch him cook it. He said, "Oh, I'm not cooking it. You are." A moment of fear crept over me, and I was worried that I would somehow ruin everyone's dinner. "Um, I don't know that I can do that," I sheepishly answered. "Sure you can, " he replied, "I will tell you exactly what to do." Then he grabbed a wine glass, poured himself a tall glass of white wine, and added, "Let's get a few things chopped up and then we'll turn on the electric skillet."

And that, my friends, was the awkward beginning of my love affair with cooking.

I mentioned the electric skillet, by the way, because for years I was convinced that I had to use one when making linguine with clams (technically, white clam sauce). I mean, I knew you could probably just use a stove top, but I had never made it that way before, so for a few years afterwards I continued to use an electric skillet; not just for linguine and clams, but for a number of other things as well. I liked knowing the "preciseness" of the temperature, as indicated on the dial. But finally, I weaned myself off of it, and I don't think I have used one since 1991.


What does this have to do with cooking and a pandemic? Nothing, really. In fact, I could write for three or four more hours about my cooking life before I ever got to the pandemic part of the story. But I suppose, to stay true to the title, I should skip ahead, and, for now, anyway, leave out all of the cooking stories I want to tell so that I can get to the point.

Which is a tragedy, really, because there are so many good cooking stories.


But let's jump to the late 90's, when the Food Network suddenly became one of the fastest growing stations on cable television. I am sure that there are people out there who have already written about how and why this happened. I honestly haven't taken the time to figure it out. All I know is that by the early 2000s, yummo and EVOO seemed to be household words, and while I knew a number of people who took an increased interest in cooking, I knew exponentially more people who religiously watched the Food Network and put ridiculously nice kitchens in their homes...in many cases, to only get used once or twice a month.

Don't get me wrong....I don't want that to come out as a judgement. In my opinion, the kitchen is the most kick ass room in the house, and even if you don't really use it, the aesthetics alone are likely worth the money that was spent on it. Besides, 9 times out of 10, when you have a large party or gathering, the kitchen is where most of the people like to hang out (partly because that is where the food and drinks usually are, but also partly because of the inherent vibe of the space).

But I mention all of this because while an interest in cooking was clearly on the rise, what I witnessed most was nice kitchens with expensive appliances, frequent conversations about Food Network programs, and lots and lots of photos on Facebook of beautiful meals prepared in restaurants (again, no judgement here...I posted plenty of those photos).

In fact, I think for many years, this interest in food and cooking (for many people, at least) veered more in to an interest in eating other people's cooking, and thus, the "foodie" was formally born. And it's easy to see why. An interest in cooking was growing on the commercial side of things as well, and more and more restaurants serving amazing and interesting food were popping up everywhere. If one had the money, but lacked the time or inclination to cook, eating out was the next best thing. It was a mediated experience, of course, but it still allowed one to partake in the growing trend and interest in food.

We could discuss how that expression of food and cooking did or didn't get off track, but the "foodie" conversation will have to wait for another day. In 2020, the next turning of the cooking wheel was taking place.


I remember when I first heard about the coronavirus. Back then it was still the coronavirus and not COVID-19. It was also still contained to China. Or at least it seemed to be.

I also remember when I first heard the calls for the World Health Organization to label it a pandemic. Although I knew what that meant, in theory, I had no idea then that what it would amount to, now, was most of the U.S. population hanging out at home in relative isolation.

Additionally, when word of the first pillages of toilet paper made it's way through the media, it still seemed to just be a funny, albeit confusing, over-reaction by the panicked masses.

Even then...I didn't see it coming.

Now, two to three weeks in to sequester (depending on who you are and where you live), it is almost impossible to find flour and yeast.

Were that many people silently waiting? Waiting for the day when they would be forced to stay at home to cook and bake? My Facebook feed is full of photos of food. All types of food. Food actually made by the person posting the photo. I also see lots of Facebook live videos of people filming themselves cooking and baking.

And I LOVE it. I really do.

I mean, it sucks that I can't buy flour or yeast anywhere, but in this pandemic madness; in this time of uncertainty and fear and anxiety; a time when no one knows what our lives will look like on the other side, or when the "other side" will even be; many people are using their time at home to rediscover, or perhaps to discover for the first time, the true joy of cooking.

That's not to say that some won't go back to what their lives were like before COVID-19 when this all passes, but I have to believe that maybe, just maybe, all of this time at home, not knowing what lies ahead, will create something that no Food Network show could ever do: give people the time and energy to have a first-hand, visceral experience of what a personal and intimate relationship with food and cooking feels like.

And my hope is that, for many, this will greatly alter how we view our food. And perhaps more importantly, that we pass that reclaimed vision on to our children. 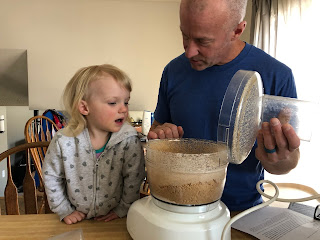 Thanks Tim. Love you sharing some of your cooking journey. I agree it is fun to see all Facebook and Instagram posts of people cooking. I've been pleasantly surprised by the feedback from people watching me cook. People have have told me the look forward to it and have been inspired to cook themselves. I just like the company while I cook. Again thanks for the blog and sharing your thoughts